Squirrels are one of the most common mammals that you will see in your backyard. Typically you can see at least one bushy tail every time you look out a window or look in a tree.

The name squirrel was first designated for them in 1327, based on an old Anglo-Norman word “esquirel.” They are almost exclusively herbivores, and exist in nearly every climate on the planet. They are typically fairly small and will gather in large numbers when food sources are found. They typically form their nests near to abundant food sources and will stay there through winter months. Usually they can be found in hollows or safe, dark places where they can hide from predators.

Squirrels have an average lifespan of around a year in the wild. But some have been known to live for up to 20 years in captivity. As they are rodents, squirrels must continue to wear down their teeth, as they constantly grow throughout their life. There are over 200 species of squirrels in the world, ranging in size from the 13 inch Pygmy Squirrel to the Alpine Marmot, which is around 25 inches long. 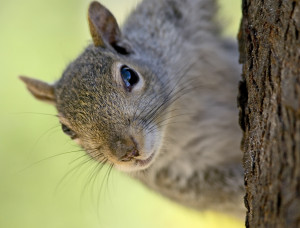 Although many squirrels live in wild environments. There is a substantial portion of squirrels which make their homes near to human habitation. This can create several problems for both squirrels and people.

Squirrels have been known to gnaw into weak points of houses and make nests in attics. They also steal food from bird feeders and sometimes even from pets. While squirrels are not dangerous to people or to most animals, they can still cause substantial damage to your home when left to gnaw through your roof or the side of your house.

Unfortunately it is also difficult to remove them once they have moved into a home. They begin to breed and rapidly increase in numbers. While the average homeowner can make efforts to reduce the squirrel population around his or her home, it is sometimes difficult to find them and to prevent them from returning even after you scare them away.

At Canton Termite and Pest Control, we have an enormous amount of experience in dealing with squirrels. We know where to look for their hiding places, and the best methods for getting the squirrels out of your home for good! Our technicians are specially trained in dealing with animals in the most humane methods possible, and we take great pride in their skill at dealing with wildlife problems with skill and efficiency.

Do you have a squirrel problem? Give us a call or text us at 770-878-3098! We have the best people, the fastest results, and the most affordable prices!

Want to know more about squirrels? Check out these sources!